TANG, under Cdr. R.H. O'Kane, set out from Pearl Harbor on 24 September 1944, to begin her fifth war patrol. On 27 September she topped off with fuel at Midway and left there the same day, heading for an area between the northwest coast of Formosa and the China Coast.

In order to reach her area, TANG had to pass through narrow waters known to be heavily patrolled by the enemy. A large area stretching northeast from Formosa was known to be mined by the enemy, and O'Kane was given the choice of making the passage north of Formosa alone, or joining a coordinated attack group (SILVERSIDES, TRIGGER, SALMON. under Commander Coye in SILVERSIDES) which was to patrol off northeast Formosa, and making the passage with them. TANG chose to make the passage alone and these vessels never heard from TANG, nor did any base, after she left Midway.

The story of TANG's sinking comes from the report of her surviving Commanding Officer. A night surface attack was launched on 24 October 1944 against a transport, which had previously been stopped in an earlier attack. The first torpedo was fired, and when it was observed to be running true, the second and last was loosed. It curved sharply to the left, broached, porpoised and circled. Emergency speed was called for and the rudder was thrown over. These measures resulted only in the torpedo striking the stern of TANG, rather than amidships.

The explosion was violent, and people as far forward as the control room received broken limbs. The ship went down by the stern with the after three compartments flooded. Of the nine officers and men on the bridge, three were able to swim through the night until picked up eight hours later. One officer escaped from the flooded conning tower, and was rescued with the others.

The submarine came to rest on the bottom at 180 feet, and the men in her crowded forward as the after compartments flooded. Publications were burned, and all assembled to the forward torpedo room to escape. The escape was delayed by a Japanese patrol, which dropped charges, and started an electrical fire in the forward battery. Thirteen men escaped from the forward torpedo room, and by the time the last made his exit, the heat from the fire was so intense that the paint on the bulkhead was scorching, melting, and running down. Of the 13 men who escaped, only eight reached the surface, and of these but five were able to swim until rescued.

When the nine survivors were picked up by a destroyer escort, there were victims of TANG's previous sinkings on board, and they inflicted tortures on the men from TANG. With great humanity, O'Kane states, "When we realized that our clubbings and kickings were being administered by the burned, mutilated survivors of our own handiwork, we found we could take it with less prejudice."

The nine captives were retained by the Japanese in prison camps until the end  of the war, and were treated by them in typical fashion. The loss of TANG by her own torpedo, the last one fired on the most successful patrol ever made by a  U. S. submarine, was a stroke of singular misfortune. She is credited with having sunk 13 vessels for 107,324 tons of enemy shipping on this patrol, and her Commanding Officer was awarded the Congressional Medal of Honor. 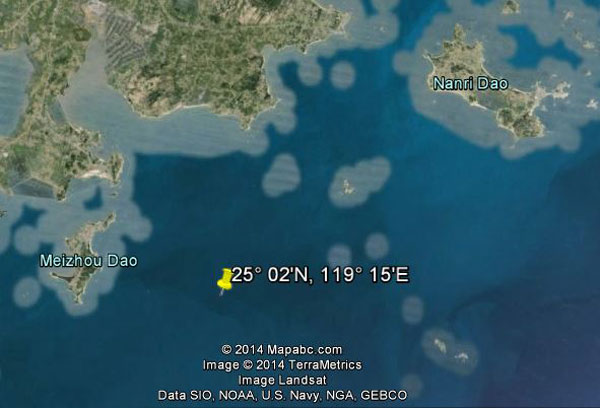 On her last patrol TANG fired twenty-four torpedoes in four attacks. Twenty-two torpedoes found their mark in enemy ships, sinking 13 of them; one missed, and the last torpedo, fired after a careful check-over, sank TANG. This vessel was awarded the Presidential Unit Citation twice during her career. Commander O'Kane has been called the Submarine Force's most outstanding officer; he served as Executive Officer of the very successful WAHOO before taking command of TANG.

In her five patrols, TANG is credited with sinking 31 ships, totaling 227,800 tons and damaging two for 4,100 tons. This record is unexcelled among American submarines. In her first patrol, spending February 1944 west of Truk and Saipan, she sank three freighters, a large tanker and a submarine tender. TANG's second patrol was in the area west of Palau, east of Davao and at Truk. She made no ship contacts worthy of attack, but at the latter island she rescued twenty-two Navy airmen during a carrier based strike at Truk on 30 April-1 May 1944. This vessel's third patrol was in the East China and Yellow Seas. Here she sank six freighters, a tanker, and a large aircraft transport. She covered the waters along the southern coast of Honshu in August 1944. She sank a freighter, a large transport, a tanker and two patrol craft, while she damaged another freighter and small craft. 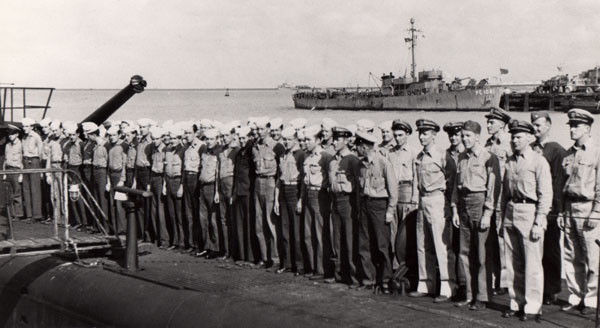 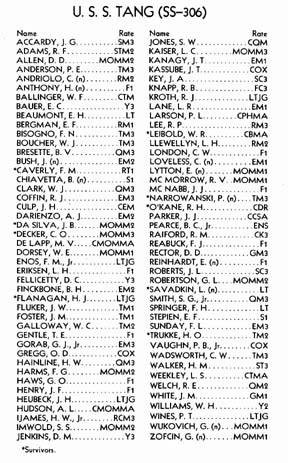