On 9 November, SCAMP was told to stay clear of the Bonins area south of 28°N during B-29 raids and she acknowledged, saying she was in 28° 44'N, 141° 44'E, and had made no torpedo attacks. This was the last communication received from SCAMP. In order to provide rescue services for downed aviators during Saipan-based B-29 assaults on Tokyo, SCAMP was ordered to lifeguard duty on 14 November. She was told to proceed to a point just east of the peninsula, which forms the eastern boundary of Tokyo Bay, on Honshu. Between that date and 26 November 1944, numerous messages were sent to SCAMP which required no acknowledgement, thus rendering it impossible to tell whether she received any or all of them.

On 29 November 1944, information was received of an enemy minefield in the vicinity of Inubo Saki, a point on the previously mentioned peninsula, and all submarines in that area were warned. Since all transmissions to SCAMP after 9 November 1944 remained unacknowledged, and she had not appeared by 21 December 1944, she was reported as presumed lost on war patrol in enemy waters.

Since the end of the war, the following facts have been learned from Japanese sources. On 11 November 1944, a Japanese patrol plane bombed what appeared to be oil trails left by a submarine, in 33° 38'N, 141° 00'E. A coast defense vessel was led to the scene by the plane and dropped some seventy depth charges in three runs on the target whereupon a large oil pool appeared.

The position of the attack is one in which SCAMP might be expected to be on 11 November, in proceeding toward her lifeguard station. On 13 November GREENLING, herself on a lifeguard station, contacted a ship at 29° 41'N, 140° 10'E. Due to the nature of radar interference, GREENLING thought that her contact was on SCAMP, although she was unable to sight anything.

On 16 November two attacks were made by the Japanese, one in 32° 10'N, 139 ° 30'E, the other in 29° 21'N, 141° 30'E. Amplifying data on these attacks reveal that on the latter attack, "Great explosive sounds came as a result of this attack." It would seem then, that SCAMP was attacked several times during her period of lifeguard duty. Whether she was badly damaged and withdrawing from the Japanese coast at the time of the last two attacks is impossible to say. No attack cited here ties in with any anti-submarine attacks reported by submarines returning from patrol. It is probable that damage to SCAMP became progressively more serious as she absorbed each successive attack, and she may have been withdrawing from the Empire without transmission facilities when the end came. 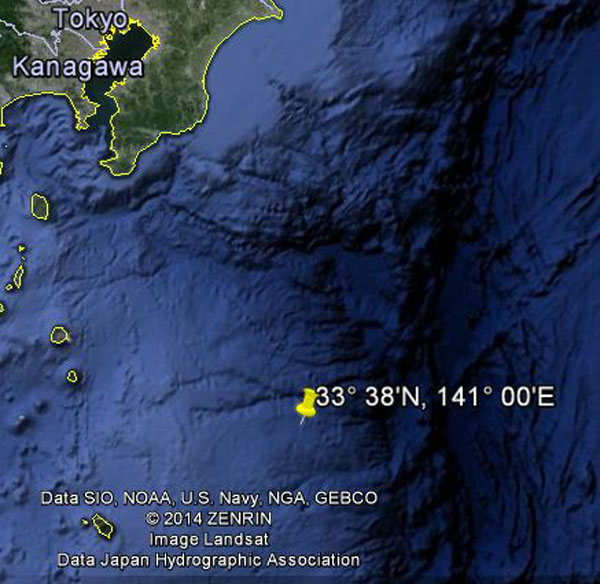 SCAMP, in the seven patrols completed before her loss, sank six ships, totaling 49,000 tons, and damaged eight, for 40,400 tons. Her first patrol was in the southern approaches of the Japanese Empire in March 1943. Plagued by poor torpedo performance, she could only damage a tanker and two freighters. In the Bismarck-Solomons area on her second patrol, SCAMP sank a large freighter. The same area was the scene of her third patrol; which netted SCAMP a submarine and a large tanker, both damaged. SCAMP's fourth patrol was in the same area as the previous two; this time she sank a freighter and a freighter-transport, and damaged a destroyer escort.

On her fifth patrol this ship covered the Truk-Kavieng traffic lanes. She sank a freighter-transport, and damaged a heavy cruiser and a transport. Her sixth patrol, in the same area from mid-December 1943 to February 1944 resulted in the sinking of a single large tanker. In her seventh patrol, conducted in the New Guinea - Palau - Mindanao area, SCAMP sank a small trawler by gunfire. During this patrol, SCAMP was severely damaged by a close enemy aircraft bomb, and was saved only by the heroic work of her Commanding Officer and crew. 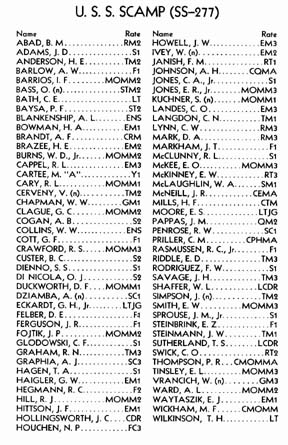