Commander S.D. Dealey guided his eminently successful fighting ship, HARDER, out of the harbor at Fremantle, Australia on 5 August 1944 to begin the sixth war patrol of that vessel. In company with HAKE, HARDER conducted training exercises enroute to Darwin. These two submarines topped off with fuel at Darwin, and on 13 August, together with HADDO, left for their assigned area west of Luzon, P. I. [Editor's note: Although HARDER and HAKE both got underway from Fremantle on 5 August and conducted exercises together through 8 August, HAKE parted company with HARDER at 2130 on 8 August. (HAKE patrol report) HAKE topped off with fuel at Darwin (HAKE patrol report), but HARDER apparently fueled at Exmouth Gulf, as did HADDO.  (Lockwood, Through Hell and Deep Water, p. 284)  HAKE got underway from Darwin on 13 August, but HADDO left Exmouth Gulf enroute Lombok on 11 August.  (HAKE and HADDO patrol reports)] They were to patrol as a coordinated attack or wolfpack group, with CDR Dealey in charge.

On the afternoon of 20 August 1944, RAY, patrolling the same area, tracked a large convoy into Paluan Bay on the northwestern coast of Mindoro. [Editor's note: The "same area" presumably refers to the area "west of Luzon, P.I."  RAY was not patrolling this area.  Her original area was the southwest coast of Borneo.  On the afternoon of 20 August, she was chasing the convoy up Mindoro Strait.] An hour after surfacing, she contacted HARDER just outside the bay and held a megaphone conversation with Sam Dealey. Dealey formulated a plan for a concentrated dawn wolfpack attack on the convoy. HARDER came alongside HADDO at 0130 on the morning of 21 August and told LCDR C.W. Nimitz, Jr., that at least 16 enemy ships were holed up in the bay. When the convoy made its exit at dawn (as convoys were wont to do) RAY was to approach from the northwest, HADDO from the west, and HARDER from the southwest. GUITARRO also had been drafted by Dealey, and was to attack from the northwest near Cape Calavite Lighthouse. [Editor's note: The patrol reports of RAY and HADDO differ on this.  RAY's report says RAY would approach from the northwest, HADDO from the west, and HARDER from the southwest.  HADDO's report says RAY and GUITARRO from the northwest, HARDER from the west, and HADDO from the southwest.  With respect to GUITARRO, there is no evidence in her patrol report that she ever received notice of this assignment.  It appears that she and RATON were drawn to the battle by the sound of distant depth charges.]

During the attacks which ensued, four ships, totaling 22,000 tons, were sunk, by Japanese admission. It is thought likely that HARDER sank one of them. [Editor's note: RAY's patrol report indicates that at 0555 on 21 August, explosions were heard in the direction of the convoy that sounded like torpedo hits from HARDER.  However, at about this time, a furious depth charge barrage began, noted in the patrol reports of RAY, HADDO, GUITARRO, and RATON.  It is possible that what sounded like torpedo hits were the first three depth charges.  No sinking was credited to HARDER by JANAC.  Neither a sinking nor damage was credited by Alden-McDonald.  HARDER's SORG score for her sixth patrol is 1.5 ships sunk for 3,200 tons, but this would be for the action on 22 August in which HARDER sank a frigate and combined with HADDO on another.  SORG does not indicate that HARDER damaged any ships on her final patrol.]

The morning of 23 August HADDO contacted a tanker escorted by a destroyer, and blew the bow off the destroyer in a down the throat shot. She fired her last torpedo in this attack, and in response to urgent calls for assistance, HAKE and HARDER rendezvoused with her. HADDO, being out of torpedoes, "received Sam's blessing" and left his wolfpack, heading south. HAKE and HARDER discussed plans for finishing off the damaged destroyer and then departed for their common objective off Caiman Point.

At 0453 on the morning of 24 August HAKE dived not far from Caiman Point and about four miles off Hermana Mayor Island, west coast of Luzon, with HARDER in sight 4,500 yards south of her. HAKE heard echo ranging to the south and soon sighted two ships. At first they appeared to be a three stack light cruiser and a destroyer, but upon later inspection were identified as a three stack Thailand destroyer (the PHRA RUANG, of 1,035 tons) and a minesweeper of less than 1,000 tons. HAKE broke off the attack and headed north when the target zigged away apparently to enter Dasol Bay, while the minesweeper stayed outside.

At 0647 upon coming to a northerly course, HARDER's periscope was seen dead ahead at about 600-700 yards. Sound also reported faint screws on this bearing, so HAKE turned away toward the south. At this point the minesweeper gave three strong pings, whereupon HAKE saw her 2,000 yards away swinging toward the two submarines. HAKE figured he had sound contact and went deep. The enemy kept pinging, but seemed to have the two targets located and to be undecided what to do about it. At 0728, HAKE heard 15 rapid depth charges, none close. Two sets of screws were heard and each continued pinging on either quarter of HAKE as she evaded to the westward. By 0955 all was quiet. 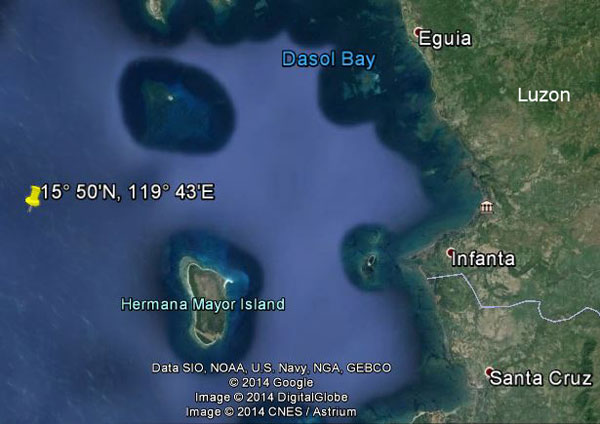 HARDER never was beard from again. Her periscope was last sighted at 15° 43'N, 119° 43'E. Japanese records reveal that an anti-submarine attack was made on the same day at 15° 50'N, 119° 43'E with 440 pound depth charges. The enemy said, "much oil, wood chips and cork floated in the neighborhood". Presumably HARDER perished in this depth charge attack.

HARDER was officially credited with having sunk 20.5 enemy ships, (The half credit was given for a ship sunk cooperatively with HADDO). This gave HARDER a total of 82,500 tons sunk and she damaged seven ships for 29,000 tons. [Editor's note: The numbers in this paragraph are based on the SORG scores.  According to SORG, the number of ships damaged was five, not seven.] 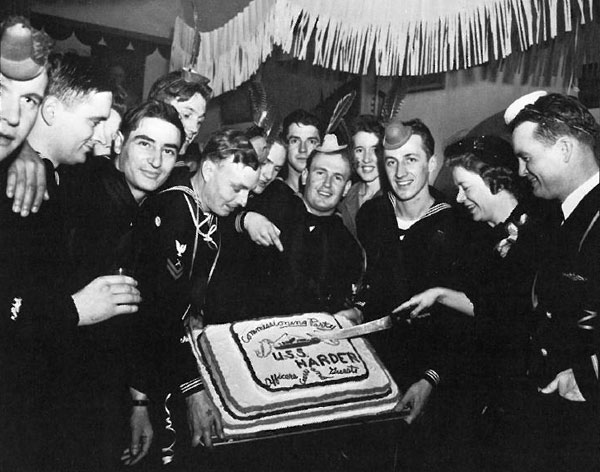 HARDER was part of a wolfpack, of which PARGO and SNOOK were the other members, on her third patrol. In the open sea north of the Marianas, she sank a freighter, three freighter-transports and an armed trawler. HARDER's fourth patrol was in the Carolines. On 13 April 1944 she sank the Japanese destroyer IKAZUCHI. She also sank a freighter and damaged a second destroyer. HARDER departed for her fifth patrol in the Celebes Sea on 26 May 1944. She picked up coast watchers from northeastern Borneo, and gave a very valuable contact report on a major task force leaving Tawi Tawi anchorage, Sulu Archipelago, in preparation to engaging in the first Battle of the Philippine Sea. She sank the destroyer MINATSUKI on 6 June 1944. On the next day the destroyer HAYANAMI fell victim to HARDER's torpedoes, and sank tail first. The destroyer TANIKAZE was HARDER's next victim, sunk on 9 June. On 10 June she damaged another destroyer. By the time HARDER returned from this patrol, she had earned the reputation of being the Submarine Force's most terrible opponent of destroyers.

HARDER received the Presidential Unit Citation for her first five patrols, and Commander Dealey was posthumously awarded the Congressional Medal of Honor for his outstanding contribution to the war effort on HARDER's fifth patrol.