HERRING, under Lt. Cdr. D. Zabriskie, Jr., left Pearl Harbor on 16 May 1944 to conduct her eighth patrol in the Kurile Islands. On 21 May she topped off with fuel at Midway and departed for the Kurile region. No word was received from HERR ING direct after her departure from Midway, but she did accomplish a rendezvous with BARB on 31 May 1944.

These two boats were to patrol the Kurile Islands area cooperatively, and at the rendezvous, as recorded in BARB's report of her eighth war patrol, the areas for which each was to be responsible were delineated. A few hours after leaving HERRING early on the afternoon of 31 May, BARB made contact with two Japanese merchantmen. While developing the contacts BARB heard distant depth charging, which she took as an indication that HERRING was making an attack.

Later that evening BARB picked up a prisoner who revealed that HERRING had sunk the escort vessel of the convoy BARB had been attacking. The ship sunk was ISHIGAKI, a new type DE built in 1942, and it was sunk with one torpedo hit. The sinking resulted in the scattering of the three ship convoy and two ships, which subsequently passed near BARB, were sunk by her. Post-war information reveals that HERRING sank the third merchantman of the convoy.

On 3 June 1944 orders were sent to BARB and HERRING directing them to stay outside of a restricted area in which friendly surface ships would be operating during the Marianas Campaign. A receipt was required for this message, but none was heard from HERRING. BARB was unable to contact her after 31 May. Consequently on 27 June, Midway was directed to post a sharp lookout for HERRING, which might be returning without ability to transmit by radio, and was expected by 3 or 4 July. When she had not appeared by 13 July 1944, HERRING was reported as presumed lost.

Japanese information indicates that HERRING was sunk on 1 June 1944, two kilometers south of Point Tagan on Matsuwa Island in the Kuriles. The report states that two merchant ships, HIBURI MARU and IWAKI MARU, were sunk by American torpedoes while at anchor at Matsuwa. In a counter-attack, a shore battery scored two direct hits on the conning tower, and "bubbles covered an area about 5 meters wide, and heavy oil covered an area of approximately 15 miles". The position of this attack was around 150 miles from the position where HERRING met BARB; the attack occured on the day after the BARB picked up her prisoner. BARB and HERRING were the only U. S. submarines in the area at the time and BARB did not make the attack on the anchored ships referred to above. As a result of the attacks reported by BARB and by the Japanese, HERRING has been credited with four ships and 13,202 tons sunk for her last patrol.

For her first seven patrols, HERRING sank nine ships, totaling 45,200 tons, and damaged two, totaling an additional 8,400 tons. Her first four patrols were in the Atlantic, the first three off the coast of Spain, and the fourth near Iceland. The first netted an Axis freighter, while on the second HERRING saw no enemy ships. Her third patrol saw her sink a Nazi U-boat, and her fourth was again unproductive of enemy targets. Her fifth patrol was the passage from the United Kingdom, where she had been based for her Atlantic patrols, to New London, Conn., thence to Pearl Harbor. She patrolled the East China Sea on her sixth war run, and sank two large transports, a freighter, and a small escort type vessel. HERRING's seventh patrol was in the area just south of the Japanese home islands; here she damaged a destroyer type vessel. 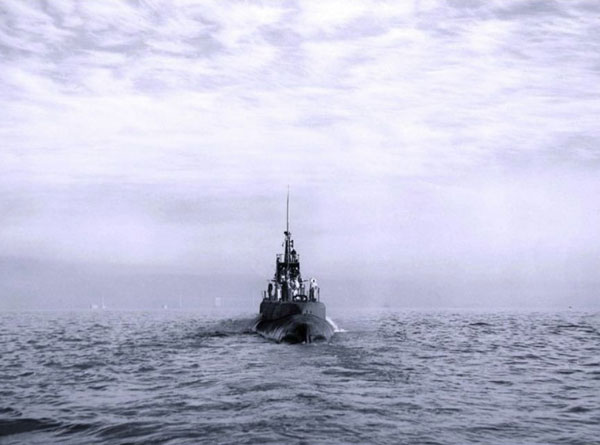