Following her second patrol, AMBERJACK's period of refit, rest and recuperation was cut to twelve days, due to the urgent necessity for submarines in the operating areas. She started out on 24 January, but was forced to return to port for the repair of minor leaks experienced during a deep dive.

Again departing Brisbane on 26 January 1943, AMBERJACK, under Lt. Cdr. J. A. Bole, Jr., started her third war patrol in the Solomons area. On 29 January she was directed to pass close to Tetipari Island and then proceed to the northwest and patrol the approaches to Shortland Basin. Orders were radioed on 1 February for her to move north and patrol the western approaches to Buka Passage. Having complied with these orders, AMBERJACK made her first radio report, on 3 February, telling of contact with an enemy submarine 14 miles southeast of Treasury Island on 1 February, and of sinking a two-masted schooner by gunfire twenty miles from Buka the afternoon of 3 February 1943. At this time she was ordered to move south along the Buka-Shortland traffic lane and patrol east of Vella Lavella Island.

Making a second radio transmission on 4 February, AMBERJACK reported having sunk a 5,000 ton freighter laden with explosives in a two-hour night surface attack on 4 February in which five torpedoes were fired. During this engagement Chief Pharmacist's Mate Arthur C. Beeman was killed by machine gun fire, and an officer was slightly wounded in the hand. On 8 February, AMBERJACK was ordered to move to the west side of Canongga Island and on the 10th, she was directed to keep south of Latitude 07° 30'S, and to cover the traffic routes from Rabaul and Buka to Shortland Basin. On 13 February AMBERJACK was assigned the entire Rabaul-Buka-Shortland Sea area, and told to hunt for traffic.

The last radio transmission received from AMBERJACK was made on 14 February 1943. She related having been forced down the night before by two destroyers, and that she had recovered from the water and taken prisoner an enemy aviator on 13 February. She was ordered north of Latitude 06° 30'S, and told to keep hunting for Rabaul traffic.

All further messages to AMBERJACK remained unanswered, and when, by March 10, she had failed to make her routine report estimating the time of her arrival at base, she was ordered to do so. No reply was received, and she was reported as presumed lost on 22 March 1943.

Reports received from the enemy since the end of the war record an attack, which probably sank AMBERJACK. On 16 February 1943, the torpedo boat HAYODORI and subchaser number 18 attacked a U. S. submarine with nine depth charges in 05° 05'S, 152° 37'E. An escorting patrol plane had previously attacked the submarine. A large amount of heavy oil and "parts of the hull" came to the surface. This attack is believed to have sunk AMBERJACK. However no really conclusive conclusions can be drawn, since GRAMPUS was lost in the same area at about the same time. From the evidence available, it is considered most likely that the attack of 16 February sank AMBERJACK, but if she did survive this attack, any one of the attacks and sightings thought to have been made on GRAMPUS (see section on GRAMPUS loss) might have been made on AMBERJACK. 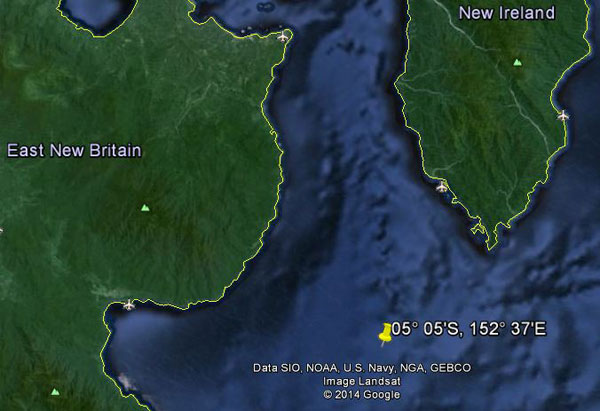 This vessel was credited with sinking three ships, for a total of 28,600 tons, and damaging two more ships for 14,000 tons damaged. AMBERJACK's first patrol was made in the Shortland-Rabaul-Buka area, as her last was. During this first patrol conducted during the last half of September and the first half of October 1942, she sank a freighter, a transport and a large tanker of 19,600 tons. In addition she damaged a freighter and a transport, and made a valuable reconnaissance of several islands in her area. The second patrol of this vessel was in the area west of Bougainville. Although several attacks were made, no damage was done to the enemy. On the basis of her radio report, AMBERJACK was credited with having sunk a 5,000 ton freighter on her final patrol. The enlisted men's recreation center at the Submarine Base, Pearl Harbor is named for Chief Pharmacist's Mate Arthur C. Beeman, who was killed in the gun battle of 4 February.