ALBACORE with Lt. Cdr. H. R. Rimmer in command, left Pearl Harbor on 24 October 1944, topped off with fuel at Midway on 28 October, and departed there for her eleventh patrol the same day, never to be heard from again. Her area was northeast of Honshu and south of Hokkaido, and because of the danger of mineable waters, she was ordered to stay outside of waters less than 100 fathoms deep.

She was to depart her area at sunset on 5 December 1944, and was expected at Midway about 12 December. When she had not been seen, nor heard from by 21 December despite the sharpest of lookouts for her, she was reported as presumed lost.

Enemy information available now indicates that ALBACORE perished by hitting a mine. The explosion occurred on 7 November 1944, in latitude 41° 49'N, longitude 141° 11'E while ALBACORE was submerged, and was witnessed by an enemy patrol craft. The craft reports having seen much heavy oil and bubbles, cork, bedding and various provisions after the explosion. 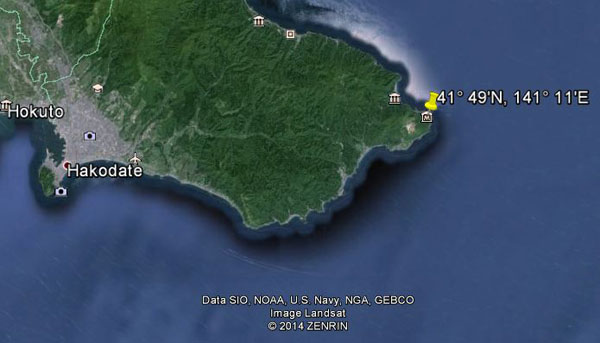 Prior to her loss, ALBACORE had been a very successful submarine, especially in her engagements with Japanese combat vessels. Her record of enemy combatant ships sunk is the best of any United States submarine. She sank a total of 13 ships, totaling 74,100 tons, and damaged five, for 29,400 tons, during her first ten patrols. She began her series of patrols with one at Truk in September 1942, damaging two freighters and a tanker. On her second patrol, near New Britain, ALBACORE sank a transport, and, on 18 December 1942, the Japanese light cruiser TENRYU. Her third patrol was in the Bismarck Archipelago; ALBACORE sank an escort vessel and a destroyer. The latter was OSHIO sunk near the New Guinea coast on 20 February 1943. During her fourth patrol again in the Bismarck-Solomons-area, ALBACORE was able to inflict no damage on the enemy herself, but she sent contact reports which enabled GRAYBACK to sink several enemy ships. In her fifth patrol, ALBACORE covered the same area and damaged a transport. She patrolled the Truk area on her sixth war run, sinking one freighter and damaging another.

ALBACORE's seventh and eighth war patrols were both in the area north of the Bismarck Archipelago during the period from mid-October 1943 to the end of February 1944. In her seventh patrol she sank a freighter and in her eighth a transport. In addition, during her eighth patrol on 14 January, ALBACORE sank the Japanese destroyer SAYANAMI. ALBACORE was ordered to patrol west of the Marianas and in the Palau area during the Allied invasion of these places in June 1944. On 19 June she intercepted a Japanese task force proceeding from Tawi Tawi anchorage, in the Sulu Archipelago, toward Saipan to engage our surface forces in the first Battle of the Philippine Sea. ALBACORE torpedoed and sank the aircraft carrier TAIHO. In addition, she sank a small freighter on this ninth patrol. ALBACORE conducted her tenth patrol near the southern coast of Shikoku, Japan. Here she sank a medium freighter, a medium tanker and a large patrol craft. ALBACORE has been awarded the Presidential Unit Citation for her second, third, eighth and ninth patrols the ones in which she sank enemy combatant vessels.