After starting on the 9th and being ordered to return on the 10th, GRAMPUS (Lt. Cdr. J. R. Craig) departed Brisbane on 11 February to make her sixth patrol in the Solomons area, having made two successful previous patrols under Craig. After leaving her exercise target on 12 February 1943, she never was heard from again.

She was directed, during the period from 14 February to 20 February, to patrol successively the area west of Shortland and South of latitude 06° 30'S, the entire Buka-Shortland-Rabaul Sea area, and to leave the southern part to TRITON, which subsequently was lost in this general area.

On 20 February, GRAMPUS was ordered to patrol north of 04° 30'S, until dawn on 21 February, and then to patrol east of Buka and Bougainville. On 2 March she was told to round Cape Henpan, proceed down the west coast of Bougainville, south of Treasury island, north of Vella Lavella and into Vella Gulf on the afternoon of 5 March. She was to sink enemy ships trying to pass westward through Blackett Strait in attempting to escape our surface ships scheduled to bombard Vila and Stanmore on 6 March. GRAYBACK was teamed with GRAMPUS in the above operation, and each was informed of the other's assignment.

The evening of 5 March, GRAYBACK and GRAMPUS were warned that two destroyers were proceeding from Faisi (off southeastern Bougainville) toward Wilson Strait (between Vella Lavella and Cannongga). These destroyers later went through Blackett Strait and into Kula Gulf, where they were sunk by our surface forces, but GRAYBACK did not report having seen or heard them. Shortly after the report concerning these destroyers was sent, GRAYBACK heard and saw a ship in the part of Vella Gulf assigned to GRAMPUS, and, assuming it was she, maneuvered to avoid. She was unable to track it or exchange recognition signals by radar, since her SJ radar was not functioning. When GRAMPUS made no radio transmission up to 6 March, she was ordered by ComTaskFor 72 on 7 March to do so. No transmission was received, and on 8 March she was ordered again to make one, again without results. She was reported lost on 22 March, 1943.

On the afternoon of 19 February, enemy seaplanes claim to have sighted and attacked a U. S. submarine at 05° 40'S, 152° 18'E. The next day, two patrol boats found a large amount of oil on the surface in this position, and the enemy believed that the submarine had been sunk. However, another enemy report states that a submarine was sighted on 24 February in 06° 15'S, 156° 35'E. Since no other U. S. submarine could have been in this position at this time, it may be assumed that GRAMPUS escaped serious injury on 19 February, or that AMBERJACK was the victim of the attack of 19 February. 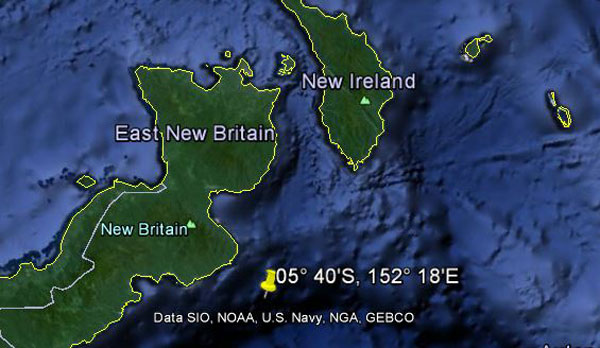 Whether the ship GRAYBACK saw and heard in Vella Gulf on the night of 5-6 March 1943 was GRAMPUS is impossible to determine, since she was unable to identify it. However, if it was GRAMPUS and she did survive the enemy attack of 19 February, the only other possibility, so far as is now known, is that GRAMPUS was sunk by the destroyers passing through Blackett Strait on the night of 5-6 March, 1943. From the information at hand, it appears that GRAMPUS could have been no more than 15 miles from GRAYBACK on that night, yet GRAYBACK reported hearing no depth charges. In view of this, it seems likely that GRAMPUS was caught on the surface by the destroyers and sunk by gunfire. Since the enemy ships were themselves destroyed subsequently, no mention of any attack by them is made in Japanese reports. A large oil slick was reported in Blackett Strait on 6 March.

In the five patrols made before her fatal one, this ship sank six ships for a total of 45,400 tons, and damaged two more for 3,000 tons.

On her first patrol, conducted in February and March 1942 in the Caroline Islands, GRAMPUS sank two 10,000 ton tankers and reconnoitered Wotje and Kwajalein atolls. Her second patrol was a passage from Pearl Harbor to Fremantle, Western Australia, and no sinkings were made. Going to the area west of Luzon and Mindoro, P. I., for her third patrol, GRAMPUS was again unsuccessful in her attempts to sink enemy ships. She conducted her fourth patrol in the Solomons. Here she landed coast watchers on Vella Lavella and Choiseul Islands, and was credited with one escort type vessel sunk and another damaged. GRAMPUS's fifth patrol was made in the Solomons also. She sank a large transport, a medium transport, a freighter and damaged a destroyer.