The fourth of our submarines lost in the Solomons-Bismarck area in the early part of 1943, TRITON, commanded by Lt. Cdr. G. K. MacKenzie, Jr., left Brisbane on 16 February 1943 to begin her sixth patrol in that area. She hunted for traffic between Rabaul and Shortland Basin on her way north, and began to patrol the equator between 154° 00'E and 156° 00'E, on 23 February.

She reported on 26 February of having seen smoke on 22 February, and that she obtained evidence of enemy radar on Buka. Moving westward, she patrolled areas northwest of SNAPPER and southeast of TRIGGER from 26 February to 6 March, when she left her area to attack a convoy in TRIGGER's area. Her report on 7 March, amended by another 8 March, stated that the convoy had been composed of 5 ships and 1 DD escort. She reported their speed and course and the fact that she had sunk two AK's of the convoy and damaged another, claiming 3 hits out of 6 torpedoes fired at noon 6 March. A circular torpedo run forced her deep, where she was depth charged by the destroyer. She had later tried two night attacks, one dawn attack, and one afternoon attack, all without success, and was returning to her area at the time she sent the message. About eight hours after this message came, TRITON transmitted another telling of another night attack on a convoy. She claimed 5 hits of 8 torpedoes fired, and, although she could not observe results due to gunfire and attack by the escorting destroyer, she believed two more freighters to be sunk.

The last word received from TRITON came on 11 March 1943 when she reported, "Two groups of smokes, 5 or more ships each, plus escorts. . . Am chasing". She was ordered to stay south of the Equator, and was informed of the area (an adjacent one) assigned TRIGGER.

On the morning of 13 March TRITON was told that three enemy destroyers had been sighted at 02° 00'S, 145° 44'E on a northerly course. She was informed that they were probably on a submarine hunt or were a convoy cover and had missed contact.

TRITON, on 16 March, was ordered to change her area slightly to the east. TUNA and GREENLING were placed in adjacent areas (to the south and west, respectively) on 22 March, and all were to disregard areas when on the chase, and to avoid when encountering a submarine. TRITON was told to clear her area on 25 March 1943, and return to Brisbane. When she failed to make her report of position, new results, and estimated time of arrival when it was expected, she was ordered to do so. No report was received and she was reported as lost on 10 April 1943.

Information available now that the war is over shows that TRITON was, without a doubt, sunk by the enemy destroyers of which she was given information on 13 March. Enemy reports show that these ships made an attack on 15 March at 00° 09'N, 144° 55'E. This position was slightly north and west of TRITON's area, but she undoubtedly left her area to attack the destroyers or the convoy they were escorting. The report of the attack by the destroyers leaves little doubt as to whether a kill was made, since they saw "a great quantity of oil, pieces of wood, cork, and manufactured goods bearing the mark 'Made in U. S. A'." In addition, TRIGGER, in whose area this attack occurred, reported that on 15 March she made two attacks on a convoy of five freighters with two escorts at 00° 00'N, 145° 00'E. At this time she was depth charged, but not seriously, and she heard distant depth charging for an hour after the escorts had stopped attacking her. Since she was only about ten miles from the reported Japanese attack cited above, it is presumed that she heard the attack, which sank TRITON. Apparently by this time the destroyers had joined their convoy. 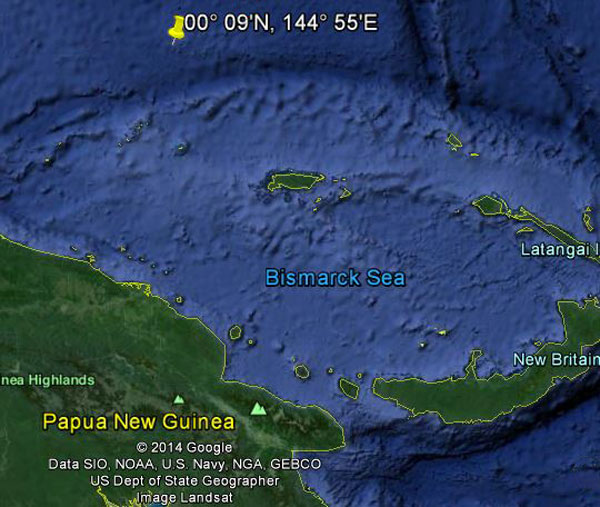 TRITON was a most active and valuable member of the Submarine Force prior to her loss. In total, she is credited with sinking 16 ships, totaling 64,600 tons, and damaging 4 ships, of 29,200 total tons. Her first patrol, conducted around Wake Island, resulted in no damage to the enemy, but her second, in the northern part of the East China Sea, was very productive. In ten days she sank two freighters and damaged a freighter-transport and another freighter. She went back to the East China Sea for her third patrol, and again was most successful. She sank a trawler, two freighters, a freighter-transport, two sampans, and a submarine. The latter was I-164, and was torpedoed south of Kyushu on 17 May. TRITON's fourth patrol was made in the Aleutians. During it, she is credited with sinking two escort type vessels.

On her fifth patrol, TRITON went into the Solomons area. She sank a tanker and two freighters, in addition damaging a tanker of 10,200 tons and a freighter. She was credited with having sunk two medium freighters on her last patrol.